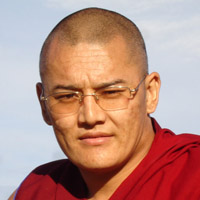 Khenchen Nyima Gyaltsen was born in 1976. He studied both at the Drikung Kagyu Jangchubling monastery in Dehradun and at the Dzongsar Shedra monastic college in Bir, India. In 2002 he was appointed Khenpo by H.H. the Drikung Kyabgon Chetsang and has been a teacher at the Kagyu College ever since.

From 2005 onwards, Buddhist texts have been translated into foreign languages under his guidance for four to five months every winter. In addition, in 2008 he started to teach in Dharma centers in the East and West during his annual holidays. In 2013, he was appointed the second Khenchen of the main seat of Drikung Kagyu in India by H.H. the Drikung Kyabgon Chetsang. Directed by H.H., he is leading the Vikramashila translation project, giving teachings and translation instructions in the Milarepa Center in Germany for three months every year.