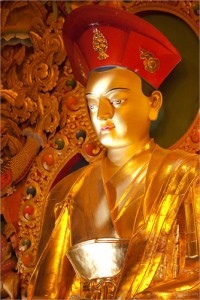 Kagyu Lineage is one of four schools of profound buddhist teaching and practice in Tibet since nearly 1000 years. Phagmodrupa was one of most important disciples of the great master Gampopa who can be called the founder of Kagyu Lineage. Phagmodrupa’s Heart Son was Kyobpa Jigten Sumgön (1143-1217). In accordance with a prediction of Phagmodrupa he established his own lineage with the foundation of Drikung Thil Monastery in 1179 in the area of Drikung, the principal monastery of the lineage.

Jigten Sumgön attained great fame and people flocked from all parts of the country to receive initiations and teachings from him. He laid particular emphasis on meditative practice and sent thousands of practitioners to three particularly sacred places, in three phases: to Mount Kailash (Gangri Tise), to Mount Lapchi, and to Mount Tsari.