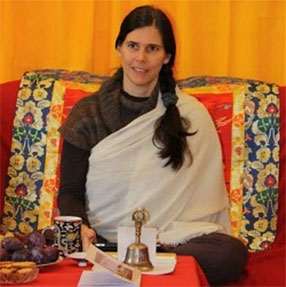 Drubpön Rachel Dodds (Yeshe Zangmo) has completed a Traditional Three Year Retreat in the Drikung Kagyu Tradition from 2004 to 2008 in Almora India under the auspices of H.H. Drikung Kyabgon Thinley Lhundup and H.E. Garchen Rinpoche, under the guidance of Drubpön Champa Rigzin. Drubpön Rachel Dodds has officially received the title „ Drubpön“ (Meditation-Master) by H.H. The Drikung Kyabgon Thinley Lhundup.

Since 2010 Drubpön Rachel has been living in Italy and teaching and leading retreats in various Drikung Centers in Germany, Ukraine, Estonia, Poland and Russia as well as teaching Buddhist Philosophy and Meditation Classes in Italy and Switzerland.

She began 2016 her position as the „Drubpön“(Meditation-Master) at the Milarepa Retreat Center. She travels there regularly to lead teachings and group retreats and support practitioners in long term solitary retreats. Under her guidance the second traditonal Three-Year Retreat with a group of six international disciples began in 2018, where she leads them through the 5 Fold Path of Mahamudra and the Six Yogas of Naropa.