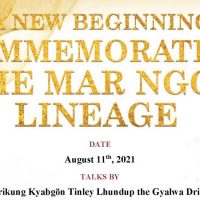 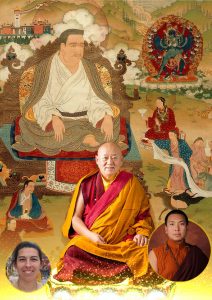 We are happy to announce the first commemoration day of the Mar Ngok lineage, in this century, celebrated at the Mahaparinirvana date of Ngok Choku Dorje. This online event is the start of an annual celebration to revive the importance of the of the Hevajra and Nairatmya Practices and the connected Tantras. They were the main practices of the great Lord Marpa Lotsawa and his disciples of the Ngok lineage. With doing so we hope to fulfill His Holiness’ wish to place Lord Marpa Lotsawa in his proper position of honor for the Kagyu lineages.

It is because it was in the Ngok family that Marpa’s tantric teachings flourished and were passed on to further generations that the Mahaparanirvana of Ngok Chokyu Dorje – one of Marpa’s heart-sons – was chosen as a date to commemorate the whole lineage.

In December 2020, His Holiness suggested a celebration to revive the knowledge of the Hevajra and Nairatmya Practices and the great efforts of the Ngok family. We are happy to commemorate this day with the following program that will last 1,5 hrs.

H.H. Drikung Kyabgön Tinley Lhundup will give a Dharma talk on the importance of reviving Hevajra and Nairatmya, which nearly disappeared in the past centuries. Also, he will talk about his aspiration to put back Marpa’s teaching at its place of honor.

After His Holiness initially expressed the wish to revive these teachings and practices, a secret library in Lhasa was reopened and many important volumes of texts, including several of the Mar Ngok lineage, were revealed. For instance, most manuscripts that constitute Marpa’s collected words were among the treasures of this hidden library, as were most writings of the Ngok lineage known today. His Holiness has been playing an important role in the republishing of these texts and the spread of its teachings.

H.E. Choeze Kuchen Rinpoche will talk about the life of Lord Marpa Lotsawa and the rise and fall of the Hevajra lineage.

Dr. Cécile Ducher will give a presentation on who the Ngok masters were, focusing especially on Marpa’s disciple Ngok Choku Dorje and his son Ngok Zhedang Dorje. She will also give a short glimpse on Mar Ngok lineage transmissions and their specificity.

Cécile Ducher has been researching the early history of the Kagyü lineage since 2000. She met with His Holiness during the events of the 2016 Monkey Year teachings in Milarepa Retreat Zentrum and has been collaborating with the Mar Ngok Group since its foundation in 2017. Cécile published a book on Marpa’s biographies, and her PhD research was on the history of the Mar Ngok lineage. She continues to study Marpa’s Hevajra tradition and aspires to contribute to the spread of the Mar Ngok lineage in whichever way possible.