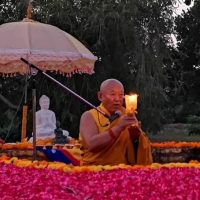 August 1st was both the birthday of His Holiness as well as Chökhor Duchen. In honor of this auspicious occasion, he composed this message:

Known as “Asalha Poornima” which in Tibetan we call “Chökhor Duchen” or “The Great Festival of the Turning of the Wheel of Dharma” commemorates the occasion of Buddha Shakyamuni’s first turning of the Wheel of Dharma at Deer Park in Sarnath. Because Buddha Shakyamuni taught the Dharma of the Four Noble Truths on this day more than 2500 years ago, we now have the possibility of ending suffering and achieving all-knowingness for the sake of self and other. 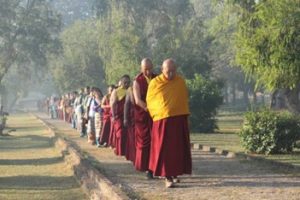 These first two Noble Truths are the “cause and effect” of bondage in samsara. The next two Noble Truths are the “cause and effect” of freedom in nirvana. Thus, the Third Noble Truth is the truth of cessation (nirodha) of suffering which we each have to experience ourselves. All confusion and suffering arise from our own minds and if we don’t want suffering then we have remove the cause of suffering from our own minds. The method of removing the cause of suffering is the Fourth Noble Truth – the path to the cessation of suffering. This path cannot be taken by others on our behalf – neither by another samsaric being or even by the Buddha. We have to develop this path in our own hearts, in our own lives. Only then can we be freed from suffering.

So for this Asadha Poornima or Chökhor Düchen, please remember the essence of Buddha Shakyamuni’s teachings which is the Four Noble Truths, which is also Cause and Effect, and which is none other than Dependent Origination (pratitya-samutpada).

Meaning in our time 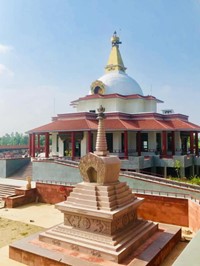 Especially nowadays, we can see the workings of Cause and Effect very swiftly. The importance of interdependent reliance not only among all human beings but also between us and all species and our earth should be so clear to all of us in the wake of the Covid19 global pandemic. In the past, because we did not have such powerful tools and technology, our human impact on the environment took a longer time for the Cause and Effect involved to be obvious. So matters of karma were often said to take lifetimes to manifest. But today, we can cut down mighty mountains, tear up the great earth, melt the glaciers, pollute the rivers and oceans in just a few months or years. But the resultant destruction we create because of our ignorance, attachment and aversion is producing suffering that will last from now into many future generations, into many lifetimes to come.

So more than ever, we Buddhists need to work together for the good of the whole world. For the welfare of all, we need to practice the Buddha’s teachings on love and compassion in our daily lives and not just in monasteries, or just in prayers and rituals. Finally, by relying on the wisdom teachings of the Buddha, we can transcend all religious, ethnic, cultural, national, political and ideological differences to work together with all people of the world for a better future for all generations and lifetimes to come.

May we be blessed with the guidance of the Three Jewels!