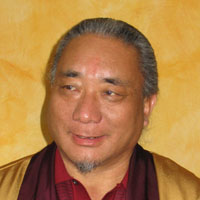 My previous incarnations are connected with Drikung Orgyen Nuden Dorje, a great discoverer of hidden teachings (gter ston) of the last century. He was well known as an emanation of Nyang Ban Tingdzin Sangpo, a great master at the time of the 8th-century Tibetan emperor Thri Song Detsen.

The elder brother of Nuden Dorje and first Ontul was Kungsang Drodul. He was born into a noble family lineage in the village of Zalmo Gang in Kham province of Eastern Tibet. The 5th Drikung Kyabgon Chetsang Rinpoche Thugje Nyima (1828-1889) recognized him to be the emanation of Brog Ban Khiu Chung Lotsawa, one of the twenty-five main disciples of Guru Padmasambhava. Since Kunsang Drodul was the elder brother of Orgyen Nuden Dorje, his successive incarnations are known as Ontul, which means “the incarnation of the elder brother”.

I myself was born in Kham Nangchen in Eastern Tibet in the year 1950. My family lineage is called Gope, or also Pebon Thogtrul, which is one of the thirteen noble family lineages which are again explained as stemming from the inner lineage of Lodan Nyingpo, who is one of the four ancient Tulkus of Bon religion, before Padmasambhava’s time.

In 1954, His Holiness the Drikung Kyabgon Chetsang Rinpoche and His Holiness the Gyalwa Karmapa recognized me as the incarnation of Ontul, and I was given the name Konchog Tenzin Thrinle Rabgye Palzangpo. Accordingly, in the same year I was enthroned in the Monastery Dong Med Ogmin Thubten Shedrub Ling. Lama Kalsang Namgyal, the attendant of my previous incarnation, took the responsibility for giving me my basic education such as in reading and writing, reciting texts, etc.

In 1959 when the Chinese Communist army occupied Tibet, my tutor Kalsang Namgyal and I left my home monastery and, together with many monks and people of our villages, we began our flight from Tibet to India. On the way we experienced terrible thirst and hunger, and we were constantly threatened by the Chinese soldiers. In spite of many difficulties, we managed to cross the Tibetan border and arrived in India through Nepal. Life in India was also not easy because we did not have a place of our own to settle down. We were forced to wander from place to place for almost fourteen years.

In India, again I met Drikung Khadro Neni Rinpoche (mkha’ ro or dakini signifies a highly realized female yogi). She introduced me to Ven. Khenpo Thubten, a great Nyingmapa teacher. The first teaching which I received from the Khenpo was an extensive instruction on the Longchen Nyingthig Ngondro practice. Later I received teachings from Khenpo Thubten on several important texts.

On different occasions I received Mahamudra and Dzogchen teachings from H.H. Dudjom Rinpoche, H.E. Khunu Lama Tenzin Gyaltsen, H.H. Dilgo Khyentse Rinpoche, H.E. Kalu Rinpoche and others. From the yogi Khyung Ka Rinpoche, I received teachings and his personal instructions on the fivefold profound path of Mahamudra. In the years which followed, I went to Ladakh where I received most of the important empowerments, instructions and oral transmissions of the Drikung Kagyu tradition from H.E. Choje Togden Rinpoche. I spent several years in Ladakh and travelled with Togden Rinpoche extensively in Ladakh to visit several Drikung monasteries with him.

After coming back to India, in 1971 I bought a piece of land at Tso Pema (Rewalsar, H.P.) from the donations which I received from the people of Ladakh. With the help of my monks I managed to construct a monastery on this piece of land. Tso Pema means the “Lotus Lake”, and this is one of the sacred places where Guru Padmasambhava demonstrated his miraculous powers. The purpose of his exhibiting miracles on that place was to subdue the king and the people of that region, which was then known as Sahor. It took many years for me to complete the monastery with the sacred objects, ritual instruments, and other necessary things. Now the monastery is almost complete and nearly thirty monks are residing there, maintaining the tradition of the Drikung Kagyu.

In 1978 H.H. Drikung Kyabgon Chetsang Rinpoche recognized the 7th incarnation of the Terton Ogyen Nuden Dorje and gave him the name Konchog Lhundrub Nyendrag Namgyal. At that time the young Tulku was only three years old. In 1980 he was enthroned as the spiritual head of our monastery. At present he is studying at the Drikung Kagyu Institute in Dehra Dun, U.P., India.

In 1983 I made a journey to central Tibet and Kham, my first visit to Tibet after I escaped in 1959. First I reached Lhasa and then after making a short visit to Drikung Til, I traveled to my monastery in Eastern Tibet. It was one of the bigger Drikung monasteries in that area and it is located close to my birth place.

During the Cultural Revolution the main monastery was completely destroyed. Through the effort of three Tulkus (Tulku Thupnying, Gyaltsep Tulku, Tulku Phulltsok), and Lopon Gonjam, monks, and the local people it is being rebuilt now, some parts have already been completed. There are about one hundred monks, some of them are in retreat of ”Chagchen Ngaden”. Since Yogi Pachung Rinpoche passed away, they are guided by his main disciple, Ven. Gelong Tenzin Nyima.

In this area I spent almost six months attending several ceremonies in my monastery, giving empowerments and teachings to the monks and local people. I also initiated “Vajra Khilaya Dupa” (annual ritual) in our monastery and since then it is done for ten days annually. Our Monastery has several branch monasteries, among them Bumang Monastery. Their Rinpoche died during the Cultural Revolution. His reincarnation, now eleven years old, was recognized by H.H. Drikung Kyabgon Chetsang and at present is studying in Drikung Kagyu Institute, Dehradun, U.P., India. Our monastery also has one branch nunnery which was destroyed completely by the Chinese communists. Since 1993 it is under reconstruction and some nuns are practicing Dharma there.

From Kham, I returned to Drikung in Central Tibet in the autumn of the same year. At Drikung Til monastery I had the opportunity to meet Yogi Pachung Rinpoche. From him I received oral transmissions and teachings, which I, together with Ven. Gelong Tenzin Nyima, repeated thoroughly and then practiced. During this time I met H.H. Drikung Kyabgon Chungtsang Rinpoche who was residing at Lhasa. After staying in Drikung for a period of nearly three weeks, I came back to our monastery at Tso Pema in Northern India.