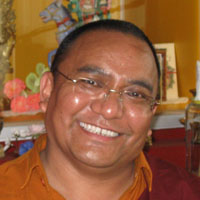 Drubpön Kunsang was educated in the art of thangka and mandala painting. He then joined the Drikung Kagyu Institute, a large monastery in Dehra Dun (northern India). In the following seven years he completed his studies as a monk in the following areas: “The Five Treatises on Buddhist Philosophy”, Tibetan Poetry and Grammar. In 1997 he received the title of Shastri (Kachöpa or Dharma teacher). He taught young monks Tibetan grammar and Buddhist philosophy.

He then went on a three year retreat in Nepal, where he devoted himself to the “Six Yogas of Naropa” and the “Fivefold Path of Mahamudra”. He completed the exam with the “Master of the Retreat” award. He was then involved in the “Science meets Dharma” project. As a representative of the Kagyü lineage, he spent the years 2001 to 2005 at the Tibet Institute in Rikon, Switzerland. Here he was trained in science and intercultural understanding.

In 2005, the Drikung Kagyu Dorje Ling Center with Drubpön Kunsang as the leading Lama was inaugurated by H.E. Garchen Rinpoche with the blessing H.H. Drikung Kyabgon Chetsang. The center is the only one of the Drikung Kagyü line in Switzerland.