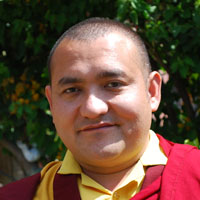 Khenpo Könchog Tamphel was born in Ladakh in 1975. At the age of nine he became a novice in Lamayuru Monastery, where he received basic Dharma training for several years. There he also studied and practiced some of the Drikung Kagyü rituals. In 1987 he went to the Drikung Kagyu Institute in Dehra Dun, India for advanced Buddhist studies. There he studied for nine years the twelve main commentaries by the masters of Nalanda and the Drikung Kagyü treatises such as Gong Chig, ‘The Heart of the Mahayana Sutras’ etc. under the skilful direction of Khenpo Togdol Rinpoche, Khenpo Könchog Mönlam, Khenpo Könchog Tashi and Khenchen Könchog Gyaltsen Rinpoche. After completing his studies in 1996, he traveled as a translator from H.H. Drikung Kyabgön Chetsang Europe and Southeast Asia. He also taught at Drikung Kagyü centers in Malaysia, Singapore, North America, Estonia and Latvia.

In the meantime, he attended a one-year English-Tibetan translation course in Dharamsala and then studied works by Maitreya at the Dzongsar Institute for a year. For a few years he was the resident Khenpo at the Songtsen Library in Dehra Dun. In addition to his teaching in the library, he has translated some rare Drikung Kagyü texts into English and published several books in English. He has been living in Vienna since 2015 and works at the University of Vienna. In addition, he continues to translate texts from Tibetan into English.